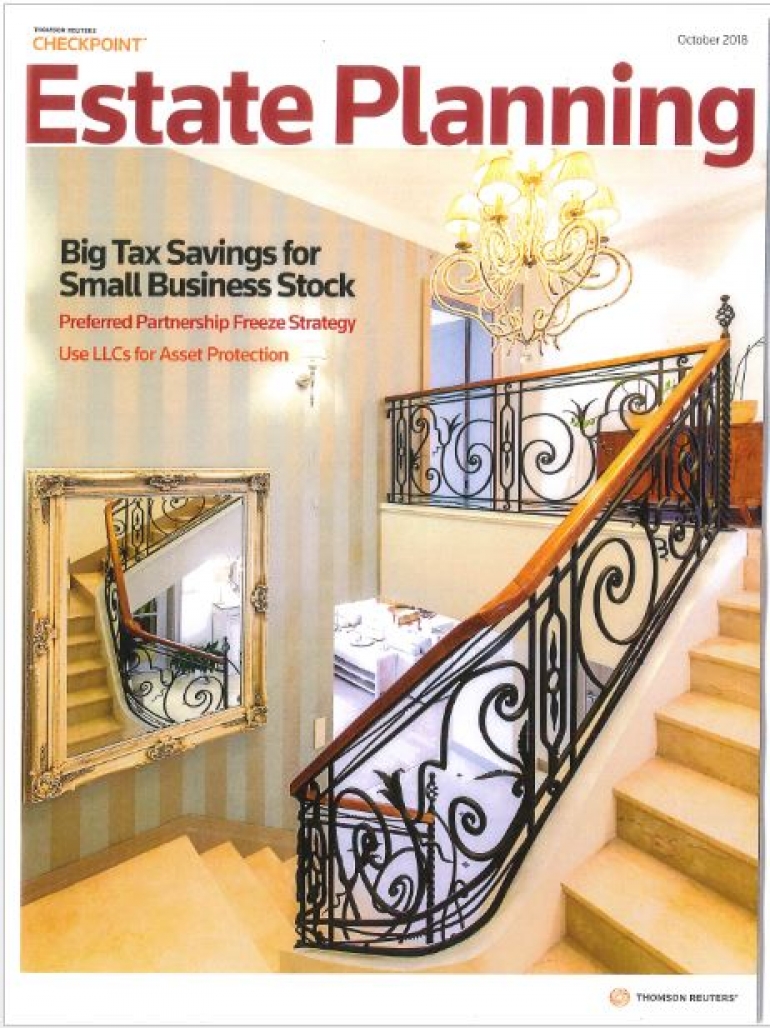 A limited liability company can provide greater protection from creditors than the corporate form of entity, but LLC statutes differ among the states.

Limited liability companies (“LLCs”) have become the entity of choice for both business and personal planning. The corporation has waned in popularity due to the exposure of corporate stock to creditors. Although corporations insulate shareholders from operational liabilities (known as “inside” liabilities), an indebted shareholder may be compelled to surrender corporate stock to a judgment holder. The judgment holder then becomes a shareholder (with all shareholder voting and liquidation rights).

Like corporations, LLCs insulate owners (known as “members”) from business liabilities. However, unlike corporate stock (available to creditors of a shareholder), equity held in a protective LLC cannot generally be reached. An “outside” creditor (of an LLC member) cannot acquire a voting interest or assets of a protective LLC. Claims on LLC interests are generally limited to a lien charged against distributions.

In protective jurisdictions, the holder of a charging order has only an economic interest (in distributions) and cannot sell the debtor’s ownership interest, force distribution of company assets, or vote on any company matters. The charging order limitation is what creates “outside asset protection” (as the “outside” creditor of an owner cannot get “in” to the assets of the LLC). This “outside” limitation on creditors (if properly implemented in a protective jurisdiction) generally prevents involuntary equity transfers.

LLCs therefore insulate members from both: (i) company “inside” operational liabilities (similar to corporations), and (ii) a second, “outside,” protection of LLC equity (not offered by corporations). The strength of a state’s LLC statute determines the degree of outside protection. The LLC’s combined protection makes corporations archaic (and avoids the need for partnerships which offer the charging lien limitation but expose general partners to business obligations).

The LLC is relatively new to the U.S. Similar entities have, however, operated in other countries for centuries. The first American LLC statute was adopted by Wyoming in 1977. All fifty states and several foreign jurisdictions have passed LLC organizational statutes. However, the level of protection varies dramatically from state to state (and country to country).  For instance, several states actually permit attachment and foreclosure of certain LLC interests. Several factors must be considered in deciding where to establish an LLC.

The goal is to find the most protective entity for the proposed business or investment arrangement. To understand the differences between LLCs, one must understand the origins of the LLC law adopted by the states. The historical legal framework emanates from the uniform acts originally proposed to the states. The uniform acts are proposed to the state legislatures by the National Conference of Commissioners on Uniform State Laws.[2]  The acts are intended to create consistent and coherent uniformity among the states. Unfortunately, state LLC law has developed sporadically from a patchwork of uniform acts and cases.

The charging order language was first proposed in the Uniform Partnership Acts (1914 and Revised in 1997), the Uniform Limited Partnership Act (1976) (regarding limited partnerships) and the Uniform Limited Liability Company Act (1996) (“ULLCA”). Such Acts do not strictly limit the creditor of a member to distributions payable to the debtor/owner. The uniform acts authorize the creditor to foreclose partnership/LLC economic interests (subject to a charging order). Under the Acts, a charging order constitutes a lien on the debtor’s distribution interest, which may be foreclosed. The purchaser at the foreclosure sale permanently obtains debtor’s distributions rights. To make matters worse, a creditor with an ULLCA charging order may seek judicial dissolution of the LLC.[3]

Although the ULLCA statutes allow for creditor foreclosure of distribution rights, the real exposure is the judicial propensity to completely disregard limitations on creditor remedies. In such cases, the judge allows attachment of the debtor’s membership interest, exposing LLC managerial control and assets. This has happened in Colorado, Idaho, Maryland and Florida regarding single-member LLCs.

The right to foreclose creates a trap for unaware residents of states with compromised LLC statutes. The use of an LLC based on the ULLCA (not limiting the creditor “exclusively” to a charging order) is ill-advised. Superior charging order protection is available in other states (and countries). The states and commonwealths which have adopted ULLCA (or the Revised Uniform Limited Liability Company Act (2006) (“RULLCA”), which also includes foreclosure rights) are: Alabama, California, Connecticut, Florida, Hawaii, Idaho, Illinois, Indiana, Iowa, Minnesota, Montana, Nebraska, South Carolina, South Dakota, Utah, Vermont, Washington, D.C., Washington, West Virginia, Wyoming and the Virgin Islands.

North Carolina is one of the first states where a court explicitly acknowledged the charging order limitation. In Herring v. Keasler, the Court of Appeals prevented a creditor from seizing and selling the debtor’s North Carolina LLC interest.[4]  The original creditor, Branch Banking & Trust Company, obtained a judgment against Bennett Keasler for nearly $30,000. BB&T assigned the judgment to Max Herring who, in turn, attempted to collect on the judgment by seizing Mr. Keasler’s interests in several LLCs. The trial court refused to liquidate Mr. Keasler’s LLC interests. Affirming the trial court’s decision, the appeals court prohibited transfer of membership interests to Mr. Herring unless the LLC’s operating agreement so authorized.[5]

In Greenhunter Energy, Inc. v. Western Ecosystems Technology, Inc.,[6] the Wyoming Supreme court upheld a ruling permitting the creditor of a corporation’s wholly owned subsidiary to “pierce the corporate veil” of the subsidiary to reach the parent. The ruling made the parent company responsible for the debts of its subsidiary. Veil piercing is an extraordinary remedy typically reserved for fraudulent conduct. The remedy is rarely permitted unless an entity is found to be the mere “alter ego” of its owner (making it unfair to shield the owner from the subsidiary’s debts). In Greenhunter, the Wyoming Supreme Court acknowledged that the two companies (parent and subsidiary) maintained separate bank accounts and business records. The court, however, took the unprecedented step of considering consolidated tax returns as a factor favoring the alter ego relationship and permitted the plaintiff to pierce the subsidiary to reach the parent’s assets.

IRS rules allow for a single-member LLC to be taxed as a disregarded entity. One of the principal advantages of the single-member LLCs is the ability to shield the owner from both inside operational liability and outside equity protection coupled with “disregarded” tax treatment (avoiding the need for a separate tax return). The Wyoming Supreme Court’s decision to confuse tax treatment with legal liability runs counter to proper application of LLC protections. The ruling essentially eliminated Wyoming from consideration when forming an LLC.

Other factors should also be considered in determining where to form the LLC. If stability is a concern, Delaware is a traditional choice and Nevada offers a sound alternative due to its reliance on Delaware’s long-standing body of favorable corporate law. If privacy is a concern, Delaware (which requires almost no public disclosure) is the best domestic option.

The types of assets to be owned by the LLC should also be considered. It makes little sense (for instance) to rely on the protections of a Delaware LLC to house Florida real estate or investment accounts. The practical reality is that any litigation involving the property is likely to occur in Florida, where a Florida court could be expected to apply Florida’s LLC law.[7]

Entity selection is a fluid process.  Many factors should be considered, including the relative protections available in different jurisdictions and the purpose, assets, business and owners of any entity utilized.

[2] The National Conference of Commissioners on Uniform State Laws (also known as the Uniform Law Commission (ULC) was established in 1892 and provides states with non-partisan guidance to critical areas of state statutory law. More information at www.nccusl.org/Narrative.aspx?title=About%20the%20ULC

[3] ULLCA, § 503(e)(3), drafted by the National Conference of Commissioners on Uniform State Loans.

Gary is the author of two books. In 2013, he wrote Asset Protection for Professionals, Entrepreneurs and Investors, a guide to asset protection strategies for clients and their financial advisors, now in its second edition. This year Gary finished the first edition of The U.S. Estate and Gift Tax and the Non-Citizen. This new book explains how resident and non-resident foreign nationals are impacted by the U.S. Estate and Gift Tax.

Eric also volunteers as a Guardian ad Litem with the Orange County Legal Aid Society. He is rated AV – Preeminent by Martindale-Hubbell and regularly publishes articles and makes presentations in the areas of asset protection and real estate law.